The theory is that Intrisic Data Fields (IDFs) occur around everything. The IDF contains all the information about what's inside that field.

In his 1980's books, Dr. Rupert Sheldrake, Ph.D., (Cambridge) refers to morphic (form) fields and morphic resonance. Morphic fields include IDFs. In 1966, physicist John Bell proposed a test for action-at-a-distance. All the experimental results were positive. IDFs are part of the linking medium between particles.

In 1935, Einstein, Podolsky, and Rosen presented a paper proposing that quantum mechanics may be missing "information at a distance." The EPR paradox states that if you separate two fully described particles, measuring one particle will give information about the other. A telepathic IDF link appears between the two particles.

The use of dowsing rods by government and industry to locate underground wires and tunnels is an example of IDF interaction.

Informational fields, sometimes called Intrinsic Data Fields, are somewhat like the software or programming that makes your computer become a word processor or a graphic art studio. The hardware (the computer itself) can be made to do very different tasks depending on the program that is installed. Our bodies function much in the same way. 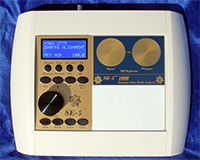 We hear a lot about muscle memory these days which describes the way in which we learn new abilities such as sports or playing music. This new information is programmed and locked into our muscles as well as the brain. Some scientists even think that our whole body is part of the memory system set up similarly to holographic film. Imagine if each cell of our body had the ability to accept information, store or update the files and discard old outdated information. If this were true, the only trick to staying or becoming healthy would be to figure out how to get the new information in and get the old information out.

I believe that the SE-5 works precisely on this principle. IDFs are similar to the blueprints of a building. They are the map for the energies of manifestation to follow.