EVERYTHING IN THE UNIVERSE IS ENERGY IN ITS MOST FUNDAMENTAL FORM AND ALL FORMS OF ENERGY ARE GOVERNED BY INTRINSIC DATA FIELDS (IDFs) . Energy exists everywhere as potential and in motion creates fields allowing energy to be transmitted, absorbed and conducted.

Energy exists in spirit as consciousness, in mind as thoughts, in emotion as feelings, in electricity, in magnetism and gravitation as force fields, in the physical as molecular mass and in an energy exchange as communication. Light, sound, heat, magnetism, color, electricity, are all just different forms of the same source...energy. They differ only in frequency of vibration and the medium of conduction.

The air we breathe, the food we eat, the people we know, our thoughts, feelings and our body as well as the environment in which we live is fundamentally concentrated energy fields existing at different frequencies.

Like all objects, the body radiates and absorbs frequency waves of energy. Each of our senses: seeing, hearing, tasting, smelling and touching, work through energies at specific frequency bands along the electromagnetic spectrum.

We tend only to believe that which we can sense, but our five senses perceive only a limited frequency band of the spectrum. We are actually unaware of most of the energies that exist. We cannot see the emanations of police radar, the energy halos around TV transmitters or VHF radio antenna, or X-rays. Yet each of these devices produces electromagnetic energies. There is a greater reality than what appears to be. One need only consider that until electricity was discovered and applied it was thought not to exist, but it had always been there, ready to be used. Our bodies may appear to be solid, but if we magnify the cells, molecules, and atoms of which we are composed we would see that at the most basic level we are made up of subtle information fields containing little if any matter. We are not just physical and chemical structures, but beings composed of energy.

Just what is a field? A magnet that attracts iron may be placed under a sheet of cardboard. Iron particles sprinkled on the cardboard will align themselves in patterns around the magnet. Scientists call these patterns "lines of magnetic force." A collection of these lines around a magnet, in three dimensions, is called a magnetic field.

A radio broadcasting station radiates an electromagnetic field from its tower. This field of energy may be mapped out or measured with electric field strength meters.

All animate and inanimate objects such as Minerals, chemicals and living things are surrounded with Intrisic Data Fields. These are informational fields that structure energy into form or patterns. These fields relate to the objects or energies inside their fields.

Each year more scientific evidence accumulates bringing us closer to the realization that our health and well-being may be more related to the function of IDFs operating in and around our body.

New discoveries show how the subtle information forces in nature can penetrate everything, cause instantaneous reaction at incredible distances, do not behave according to known formulas, cannot be measured by conventional electronic test equipment, and represent a completely new spectrum.

The references to this spectrum have been given many names such as: the second force of gravity, eloptics, dowsing, radionics, radiesthesia, psionics, scalar waves, bioplasm, the ethers, L Fields, prana, Kirlian effect, chi, auras, orgone, the pre physical state, the body electric, Intrinsic Data Fields (IDFs) or biofield. Regardless of the name, these subtle energies or biofields are said to contain the intelligence or information which provides the pattern (or energy matrix) for the organization of matter. We call these informational patterns IDFs (Intrinsic Data Fields). In many instances these phenomena can explain things that cannot be explained by orthodox science.

Just as an architect prepares a blueprint for a structure to be built, similarly subtle information fields contain information, i.e. IDFs, (like a microfilm) that is a plan for how energy will be organized and structured into matter.

New instrumentation was needed to detect and balance these Biofields. The SE-5 was designed for precision and accuracy. 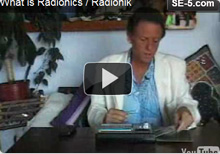